Members of the largest union of state government employees, who are locked in a contract dispute with the governor, took their complaints of under-staffing to Annapolis Tuesday.

Dozens of members of the American Federation of State, County and Municipal Employees Council 3 union wore green T-shirts and packed a hearing room where union leaders told lawmakers about forced overtime and unsafe conditions due to a “staffing crisis.”

“This extreme staffing shortage has dire consequences for the inmates who we are in charge of supervising,” said Rownite Stevens, a correctional officer at the Eastern Correctional Institution in Somerset County.

AFSCME MD 3@AFSCMEMaryland
Our members are proud to stand up for Maryland. We deserve better. The staffing crisis must be addressed and we are here to urge Governor Hogan and the Maryland Legislature to take action immediately. #MDdeservesbetter #AFSCMEStrong 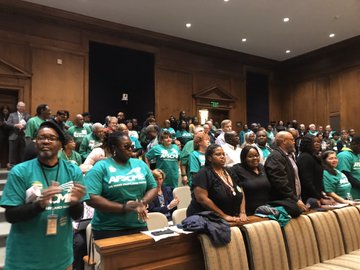 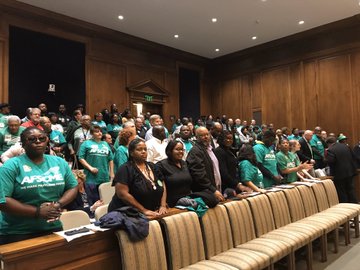 She was joined by others who told members of the House of Delegates Appropriations Committee and the state Senate Budget and Taxation Committee that the state’s correctional facilities and hospitals, in particular, have too few employees. Those who work at the facilities are poorly trained and underpaid for their work, they said.

AFSCME, which represents 26,000 state workers, estimates that the state’s prisons have more than 1,000 vacancies, and some correctional officers are forced to work as much as 80 hours of overtime during a two-week pay period.

AFSCME members also said social workers and case managers have growing caseloads that make it difficult to do their jobs well.

Representatives for Gov. Larry Hogan, a Republican, said they are working to speed up the hiring process, offer more training and boost pay for key positions.

“We take very seriously the adequacy of the staff in state facilities and the overall well-being of our employees,” state budget Secretary David Brinkley told lawmakers.

Brinkley said the average state employee’s pay has risen from $50,700 when Hogan took office in 2015 to $59,800 now — an assertion that drew guffaws of disbelief in the audience of union members.

Del. Kirill Reznik, a Montgomery County Democrat, said it is “disingenuous” to talk about average salaries when many of the union workers present make only $15 per hour.

The Hogan administration and AFSCME have had a combative relationship, with the governor and AFSCME Maryland President Patrick Moran sparring often.

Moran said in a press conference Tuesday that Hogan “has lacked any sort of morals” in making decisions on funding for state workers.

“Through systematic under-funding and delays on filling vacancies, the Hogan administration has proven they do not care about the quality of our state services or the critical role they can have for the average taxpayer,” Moran said.

While the Hogan administration reached contract agreements with other state employee unions late last year, AFSCME and the state aren’t even at the bargaining table. Both sides have filed complaints of unfair labor practices against the other.

AFSCME took issue with Hogan’s ground rules for negotiations, including an order that would prevent union leaders from discussing them with their members or lawmakers.

Even without a contract agreement, Hogan put money in the budget this year for a 3% salary increase for state employees, including AFSCME members.